Posted by Unknown on November 23, 2009
Things were a little odd in our house growing up. That box of Twinkies in the cabinet? Don't touch them, they're your father's. Those bottles of soda by the back door? They're his too. How about the ice cream in the freezer? You can have a small dish as long as you fix your father a bowl of it too, but make sure you use that big mixing bowl for his.

Yep, that is how it was. There were certain things in the house that were just not for us kids. Don't worry, we were not totally deprived of snack foods. There were usually cookies around for us. Dad worked hard and the one thing he asked for was snack cakes and soda to take to work in his lunch box. So, they were off limits.

We really didn't mind that those things were his. That's the way it had always been and we didn't ever think about it as unfair. It was just the way things worked. That doesn't mean we didn't look at those snack cakes and wish we could have one though. I can look back on it now, as a parent, and I totally understand his point. He did work hard and deserved a few things of his own.

There was one thing we had trouble with leaving alone though. The strawberry Quik. A canister of that delicious powder was always somewhere to be found in our house. Literally, somewhere to be found. As in, it was hidden. Dad knew that my brother and I were unable to resist the pink stuff. So.... he hid it. Sometimes it was in the kitchen cabinet behind some cans of disgusting peas. Sometimes it was hidden in behind the coffee maker. Then there were the times it wasn't in the kitchen at all. We once found it in the china hutch.

Whenever my brother or I would find the canister of strawberry goodness, we would quickly alert one another, fix a couple of giant glasses of strawberry milk and then put the canister back where we had found it. Of course when we would go back to that spot the next day, the canister had been moved. Dad could always tell when the powder level had gone down and it was time to move it to a new hiding spot.

Eventually my brother and I grew. When we were no longer kids, the rules of the Quik game changed.

We were no longer partners in crime, searching out the pink treat hidden by our dad. Instead, we became opposing agents, working against each other. You see, he would buy the Quik, but he wouldn't put it in the cabinet with the other groceries. He hid it! I would then seek it out. Once found, I would fix myself a large glass and then find a hiding place of my own. The two of us would continue to search for the Quik, find it and re-hide it.

Somehow, the hiding of the strawberry Quik had become a family tradition.
Me Myself and Monday 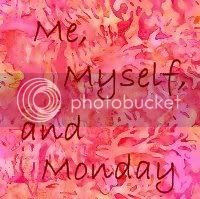 Grab This Button You know that mom? The one that has all the neighborhood kids at her house all the time. Her door is always open. She greats each child that walks through the door by name, because she actually knows all their names. She has a kitchen full of snacks, sodas and juice boxes and she's always willing to pass them out to any kid that walks through the door. In fact she probably has a special pantry just for all the goodie she buys specially for the neighborhood. Her living room is full of loud, rowdy tween boys playing video games. She smiles and cheers them on as she passes through. From down the hall comes the giggle of teen girls along with thumping bass of their music that's being blasted on the stereo. She peeks in on them to offer them snacks and drinks because she knows they are just too busy texting or messing around on Facebook to actually walk to the kitchen themselves. Out in the backyard is a group of eight year olds bouncing on the trampoline or pl