A Funny Thing Happened On My Way To Church

Posted by Unknown on July 02, 2012
I was running really late for church yesterday. I almost didn't go actually, but needed to honor a commitment to volunteer and so I went. As I was rushing to church I witnessed something terrible.

The first thing you need to know is that I hate birds. They scare the crap out of me. I honestly believe that birds have an overwhelming desire to peck our eyes out. You know the Hitchcock movie The Birds? It is a true story... it just hasn't happened yet! This summer has been a really bad one for me as far as birds are concerned. Mother birds have been pushing baby birds out of their nests in my yard like crazy and there have been baby bird carcasses all over. Ew! Also, my driveway sits right under a very large tree. That makes my van a toilet for birds. I have to clean my windshield pretty much every day before I can drive. I have also learned not to leave my windows down because apparently birds can poop sideways. Double ew! Well, my point is that I really do not like birds. 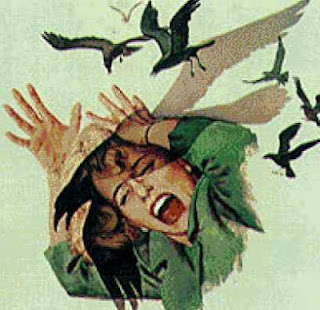 Oh! It WILL happen!

So as I am driving rather fast with a windshield full of bird poop (cause I was running late and didn't have time to clean it) I end up behind a guy in a jeep. He is taking my secret shortcut (how he knows my shortcut I have no idea! It is supposed to be secret after-all) and slowing me down a bit, but not much cause he is speeding too. The shortcut runs through a residential neighborhood (don't worry, neither of us was speeding so fast that we couldn't have stopped if an unattended child ran out into the street) with a lot of trees. Lots of trees = lots of birds. In the street there was a small cluster of birds looking for some sort of treat. Maybe a worm, or a crust of bread, or possibly a human eye, I don't know... but there they were in the opposite lane snacking on something. That is when I witnessed the terrible act. The guy in the jeep intentionally swerved over into the other lane trying to hit the birds! Even worse? He hit one of them!!! I gasped aloud as I saw that bird laying there on his back, fluttering his injured wings. His little birdie buddy flew down to his side and looked helplessly at him. Now, I didn't stop to try and help the bird like some people might have. I am not a vet and as I said, I am SCARED of birds. But... I did feel bad about the poor thing getting hurt and even worse knowing that someone had done it intentionally.

I joke all the time about wanting to kill the birds that live in my yard. I have mentioned BB-guns, tossing out rice in the yard, getting a dozen cats, and I've maybe even mentioned throwing out some bread laced with rat poison. I wouldn't actually do it though! I only say those things in jest. Yes, I hate birds. No, I would not actually kill any. I felt so bad about that poor bird laying in the street, the victim of some sadistic jerk who took pleasure in trying to kill a helpless animal. I almost cried actually. Over a bird! and I hate birds. I am still not over this by the way. Poor little eye-pecking creature. He didn't deserve that. The guy that him? Well, he probably deserves what he gets when The Birds comes true. Just sayin'. 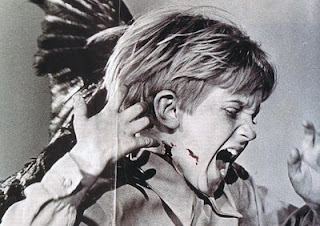 The bird incident is not the end of my tale. No, there was still more to come on my quick drive to church.

The second thing you need to know is that the air-conditioner in my van does not work right. It gets cold, but it does not blow. There is something wrong with the fan. It works fine in the backseat, but not in the front. If I am driving down the highway then cold air somehow gets pushed through by the force of the speed and wind. On city streets it gets pushed through a little bit (not enough to really make a difference though, especially in the 100 degree weather we have been having) as long as the van is moving, but when stopped there is nothing. So driving through town is a hot, miserable experience. In my rush to get to church without being too late I skimped on some things. Like I just threw my hair up in a ponytail, I wore my old glasses (I lost the newer one and I hate the old ones) instead of putting in my contacts, I went really lite on the makeup (No! I am not going to go totally without in public.), and I may have forgotten to put on deodorant. Okay, I did forget. That combined with no air-conditioning? Recipe for disaster!

This is where the something funny comes in. A few blocks after witnessing the murder of Pecky (that is the bird) and feeling like I wanted to cry for the wretched beast, the fan in my air-conditioner started to blow. It just all-of-the-sudden began to work! It's a God thing. I know it. God saw me feeling sorrow for my enemy (that would be the bird again) and that I was trying to do the right thing by honoring my volunteering commitment, and he realized I had forgotten the deodorant and so he blessed me with air-conditioning for my drive to church.

After church when I got back in my van to head for home there was no air. The fan once again did not work. But, for the drive to church I was blessed with cold, refreshing air and I arrived without pit stains and the rancid stench of BO. Thanks God. It is the little things that matter.
Life