Me and March Madness

Posted by Unknown on March 25, 2013
I recently began reading a book recommended to me by some friends. As I was reading the book it just so happened that a character saw a Cleveland Indians banner flying on a burned-out building. I had a subconscious reaction of thinking "Go Indians" as I read that. I haven't followed baseball in years, but the Indians will always be my team. I have never lived in Cleveland, or even in Ohio for that matter. Still, they are my team. Apparently no matter how many years I go without watching them or cheering them on, I still have a desire for them to do well. Go Indians! Sure the whole reason I started liking them in the first place is completely due to the movie Major League. I love an underdog. I love a great movie. Give me a good underdog in a great movie and you have given me a team to cheer for. Is it the greatest, or most sensible reason for liking a team? Maybe not, but I don't think it is the worst either. There are far dumber reasons for liking a team. The pure happenstance of where one was born for example.

Yes, it is true that the most common reason for liking a sports team is due to ones location. I know this quite well as the only person in my family from Nebraska who does not chant, "Go Big Red" or own any Husker paraphernalia  The rest of them... parents, siblings, cousins, the whole gang... love 'em some Husker football. Somehow I missed out on that particular pitcher of Kool-aid. Still, as I said, location is the most common reason for liking a sports team. Ask anyone actually born and raised in Cleveland about the Indians and you will probably find yourself talking to a fan.

With March Madness taking over the country there is a rise in local cheering going on in many places. If there is a team from your state, or even luckier (call it good luck or bad depending on your viewpoint) your city or town, then you are likely seeing a rise in support for the local team. This is going on where I live right now. As the WSU Shockers were playing a few days ago I saw a thousand excited posts on social media from local friends cheering them on. Many of them people who had never mentioned this team before. Suddenly the team had the support of nearly the whole city. Some people refer to this as "fair weather fans". You know, people who are only fans of a team when they are doing well. It happens. It happens often actually.

I admit that I used to see people as jumping on the bandwagon and as fair weather fans myself. I hated that sort of thing. I refused to even wish a team well if they suddenly had the momentum to go all the way and were growing in popularity. It is silly really, because I like a good underdog. Remember that? It is often the basis for why I like a team in the first place. Yet there have been so many times in the past that I would actually wish a team would lose because I wanted the band-wagon jumping, fair weather fans to be let down.

I see growth in myself now. Maybe this seems like a silly example of growth to some, and maybe it is. Still, I know that it was pessimism that made me see people as fair weather fans. Now I can look at them in a different light. I see them not as people who are pretending to like someone because they happen to be doing well; instead I see them as people who have hope and truly wish a local team well. They are people who take pride in where they come from and are excited for the rest of the world to get a glimpse of how great this place is. When you come from a place that most have never heard of, or if they have they likely associate with it negative stereotypes (Kansas is not all farms and tornadoes people), then it makes sense to cheer on a local team in hopes that someone will take notice of the greatness there.

So.... I will never call myself a Shocker fan, and the mascot will always give me nightmares, but I can say that I hope the WSU Shockers do well. And that my friends is personal growth. 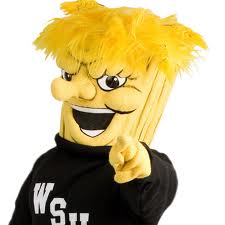 Come on now.... you KNOW this thing is just waiting under your bed to swallow your soul!!!
Me Myself and Monday