I know. It's shocking.

I grew up on Star Wars and X-men. On the playground I hung with the boys playing Star Wars. I never caved in to their decrees that I had to be Princess Leia either. No way man! I wanted to be Luke Skywalker. Forget that getting rescued crap. I wanted to wield a light saber and battle the empire. And when it came to the X-men? I was in love with Nightcrawler. 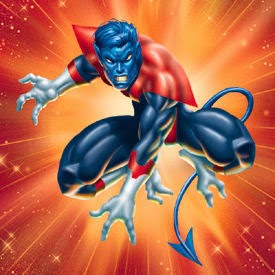 Oh yeah, I loved that blue skinned, pointed eared, fanged, three fingered, pointed tailed, teleporting mutant. Not in a romantic sort of way, just in a "how freaking cool is this guy?!?" kind of way. When I was about thirteen, my oldest brother and I would hang out at the arcade and play the X-men video game until we beat it. I was always, ALWAYS, Nightcrawler.

My geeky love of sci-fi and comics has not faded over the years. You can imagine my delight at the fact that the comics have hit mainstream in a big, big way. All the major blockbuster movies featuring comic book heroes makes me geek heart happy. It doesn't make my pocketbook happy though.

Right now in theaters we have Captain America: The Winter Soldier, X-Men: Days of Future Past, and The Amazing Spiderman 2. It is awesome to have so many great comic inspired movies out, but to quote that famous DC sidekick "holy ticket prices Batman!"
I thought Disneyworld was expensive. Try taking yourself and your kids to see all the Marvel movies for under a few hundred bucks. Either way I guess I'm forking over cash to Disney. I'll be doing it again when the big D releases their new twist on the Star Wars saga. Not sure I'll like them... but they have to be better than episodes I, II, and II right? Right?!? I sure hope so!

Well, there you have it. My secret identity.... Super Geek Mom
Me Myself and Monday