Arguing With My Anxiety

Posted by Kimberly Gail on April 25, 2017
For days I saw the post on FBook announcing a free memoir writing workshop. The first time I saw it, I thought, "that's not for me. Memoirs are for the geriatric crowd." I dismissed it without much thought, until the next day. There was that announcement again. "It could be sort of interesting," I thought.

Then, on the third day when it was shining brightly at the top of my feed I was reminded of an interesting book idea I have which involves writing in a sort of journaling format from the perspective of the main character. "Learning about writing memoirs could be useful if I follow through on that idea someday," I told myself.

On the fourth day I told myself, "I really should go," as that announcement flashed across my screen as I scrolled through my feed. By the fifth day I was telling myself, "I am definitely going to go."

On the sixth day I was already letting my anxiety try to talk me out of.

"It's a Sunday," my anxiety whispered to me. "you should really spend time with the family."

"I spend time with the family everyday," I told my anxiety. "They can spare me for two hours."

"You realize this is going to be a room full of people you don't know, right?" probed anxiety.

"Yes. That does sound horrible, but I can slip in quietly, sit in the back and speak to no one," was my attempt at reasoning with dear old anxiety.

"What if they do introductions?" sneered anxiety.

"Wh... why would they do that?" I stammered as I filled with panic.

"Because people who run things like workshops don't have social anxiety stupid. They love getting to know people and they think everybody else should love it too." 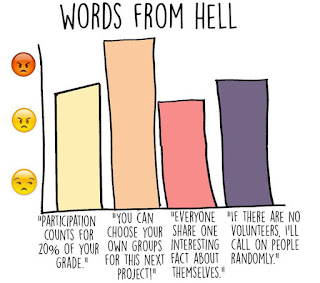 "Yeah," I admitted, "you're probably right about that."

"Of course I'm right. If you go, you're going to sit there in a room full of strangers feeling totally self-conscious and then you're going to have to introduce yourself to the whole room and your hands are going to be shaky, and you're stomach will be in knots, and everyone will know how pathetic and nervous you are because they will see it and they will hear it in your voice," reasoned anxiety. "You'd better not go."

"Yeah," I sighed, caving in to anxiety once again, "maybe you're right, I probably shouldn't go."

Later that day I mentioned the workshop to an online group I recently became a part of. I mentioned how I wanted to go, but likely wouldn't because anxiety would get in the way. I received some encouragement to go. But more than the encouragement of others, I had encouraged myself. Somehow in that simple act of telling others that this was something I wanted to do, I gave myself the power to tell my anxiety the same thing.

I wrote on my calendar for Sunday that I would be attending a memoir writing workshop at 2pm.

"What are you doing?" screamed anxiety. "We discussed this already. I thought we decided you weren't going to go to this thing?!?"

"No," I said to anxiety, "I let you bully me into thinking I shouldn't go. But you know what? You're wrong. I really want to do this and I know that I will be uncomfortable. I know I will probably have to talk to a group of random strangers. I know I may feel queasy and my hands will probably shake. But I also know that this is something I want to do and I am sick and tired of you keeping me from doing things I want to do. I hate that I let you keep me from trying new things, or going new places. I am not going to let you push me around this time," I screamed at anxiety as I underlined the workshop on my calendar.

"Yeah, we'll see," anxiety sneered as it slid away to the dark corners of my mind.

The next day anxiety kept trying to creep out of that dark place. It kept trying to change my mind. I kept telling it, "not this time," and shoving it back into its dark corner.

I woke up Sunday determined that I would be going. I got up, took a shower, and dressed for the occasion. There was no lounging in pj's on this Sunday morning because I may never have changed out of  them if I didn't do it right away. I did my make-up. It's a waste of make-up if you wear it but don't go anywhere, I reasoned. I was going to get myself ready and in the right frame of mind so that I would not back out.

Anxiety whispered, "maybe you really, really shouldn't though. Maybe this is a mistake. You're probably going to  put yourself through all of the struggle and then you won't even get anything out of the workshop."

"Do you think so?" I asked, my mind starting to fill with doubt. But then, "No, I already put in the effort to get ready to go. I did that because I want to go. I should go. I am going to go."

"Of course you are," I told anxiety, "I would expect nothing less from you. But we're still going."

Just before 2pm anxiety and I sat down together at a table near the middle of the room (not hidden away in the back) at the memoir writing workshop.
Social Anxiety What Passes For Humor writing