A Mermaid's Voice Must Be Heard

Posted by Kimberly Gail on January 12, 2018
A writer's brain is a jumbled hodge-podge of characters and stories, all screaming for attention. Often one screams louder than the others, demanding attention. For me lately the screaming has been coming from an eclectic group of merfolk. Mythical and fairytale creatures are not typical inhabitants of my creative mind, so I did my best to ignore them. It turns out merfolk can be a bit pushy. They and their story refused to be cast to the depths and burst forth through the murky waters of my imagination and onto the page. 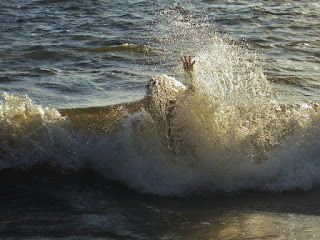 Prophecy of Peace has been put aside for the past few months as I worked to get my rather pushy mermaids out of my imagination and swimming about in the real world. I am not certain at this point where their tale will lead. Perhaps publication. Perhaps not. The waters are still a bit murky in that regard. But their tale is told, at least in part. And while I do not know how much of that tale will be shared with the world, I felt they would not be satisfied if I did not share at least one small snippet of them with whomever may happen upon this space. 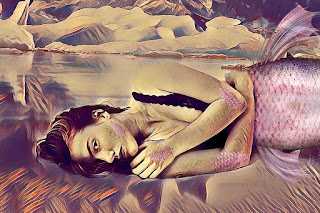 And so, I give you a glimpse into the world of Kshithij, with the opening scene of Depths of War......


Maran swirled through the murky depths of the sea, her spiked tail creating complex patterns of bubbles in her wake. The tiny changes in pressure tingled against her skin. The feeling was thrilling in more than just physical ways. A storm was moving up above. It was what the Gaharaee, the merfolk of the depths, had been waiting for. With the surface swimmers distracted by the chaos of the storm there was less chance of the Gaharaee’s warriors, the Sena, being noticed among them.

Maran turned her glowing eyes in the direction of a disturbance she felt in the water. A shimmering torpedo shot her way. Her sharp, white teeth glowed in the darkness as a knowing smile spread across her face. The torpedo stopped abruptly revealing itself as something far more dangerous, her fellow Sena, Proneetha.

“Do you feel it Maran?” her sister in combat asked. “The silt is stirring. The storm above is raging.” Proneetha spread her tentacles behind her, the tips catching at tiny particles of mud, sand, and micro-bits of shattered shell.

“Yes,” Maran answered. She could feel the silt seeping into the pores of her bone-white skin. “And now is the time for our own storm to rage. Varun and his Surfies have kept us confined to the depths for too long.” She slid a webbed hand along the length of her arm, peeling away silt and algae. The effects of living a century in the depths had become too much to bear. The Gaharaee would no longer tolerate the banishment handed down by the vainglorious lord of the sea. Today was the day they rose up from the murk and returned to Kshithij, the world where the sky meets the sea.