Why The Land of Ahs?

If you've landed here in the land of Ahs, you may be wondering at the name. If not, I suspect you may have done a stint in Kansas in the early 80's.

When I was twelve I was sucked up from my home by a powerful force, aka my  parents, and dropped down suddenly smack-dab in the middle of Kansas. Okay, not actually the middle; more like south-central Ks.

On my first day of school I was "lucky" enough to have arrived just in time for the state unit in social studies. You know, that wonderful unit in which they teach you the important facts about the state in which you live. The state capitol (Topeka), the state bird (the meadowlark), the state flower (the sunflower), and if you're super, super lucky you  get to learn the state slogan. "What?" you're undoubtedly asking yourself, "there's such a thing as a state slogan?" Yes, yes there is. And in early 1980's Kansas, that slogan was "Kansas, The Land of Ahs." 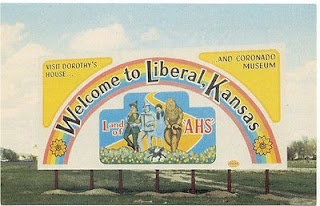 Yep, that's write folks. For years Ks had suffered under the images of tornadoes, flat land, dust, and drabness portrayed in that famous book and movie, The Wizard of Oz. So, in an effort to turn that impression around, they chose to make the best of it and created a little play on words. And to be fair, Oklahoma and Texas have far more tornadoes than Kansas. And while it is ridiculously flat here, and you're guaranteed to have too much wind on any given day, it's hardly drab and dusty.

The slogan, "Land of Ahs" has long since died out, but as it was one of the first things I learned about my new home, it has stuck with me ever since. So here I am, in a land most famously known as the home of a fictional character, and her little dog too, writing my own tales of characters with brains, courage, and heart who have great adventures in fantastical lands.
Life writing