Posted by Kimberly Gail on February 16, 2018
For today's Fiction Friday I thought I would introduce you to one of the Satah, or surface-dwelling mermaids, from Depths of War. It only seemed fair since the Gaharee, the bottom-dwelling merfolk, made their colorful introduction a while back in this post. 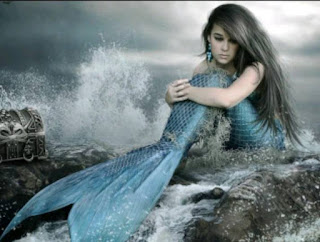 Hugging her tail to her chest, Divvy stared into the growing waves. They slapped against the rocks where she perched, throwing spray up into her face. She wiped it away. A few drops of ocean spray should have been nothing to a mermaid, but she hated the feeling. The wind whipped her long, dark hair about her pretty face as the storm began to swell. With it came a melancholy such that Divvy had never felt before. She would soon be forced to plunge down into the ocean's depths, at least as far as the sea caves in the twilight zone. Kshithij was her home and even though it lay within the sunlight zone, it had always felt too deep, too wet. She often sought out places like this one, a small rocky islet darting up from the water. She longed for the warm blaze of the sun on her skin and scales.