Posted by Kimberly Gail on March 16, 2018
For today's Fiction Friday post I will be introducing you to one of the villains in my story. Laqach is an emissary of the evil ruler Azuras. He has been sent by his master to cull one girl from the kingdom of Khoya Asa for sacrifice.

In this scene Princess Ariyanna has just been introduced to the Emissary and is forced to sit across from him at a rather uncomfortable dinner.

Ariyanna found it impossible to eat while seated across from the Emissary. Whenever she dared a glance at the man she found his sharp gaze watching her intently. She suspected he was trying to make his stare obvious to her, but not to the others seated at the table. He kept his head tilted down toward his plate as if nothing could be more interesting than his meal, and yet he kept his leering eyes raised, focused solely on her. 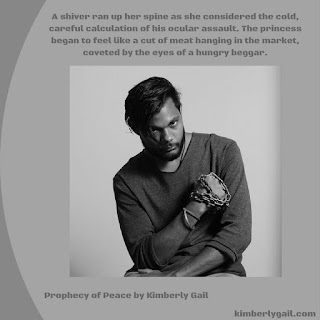 With each bite of food he brought to his mouth, his eyes never left her own. She cast an anxious glance toward her father, hoping he would notice the insolent way Laqach ogled her. It seemed the emissary was far too clever to let his impertinence be known. A length of hair, which Laqach had neatly parted to the side, fell over one side of his face in a calculated way, blocking his profile from where her father sat at the head of the table. Looking back to the emissary, she nearly whimpered aloud. His face now held a small, sneering smile. A shiver ran up her spine as she considered the cold, careful calculation of his ocular assault. The princess began to feel like a cut of meat hanging in the market, coveted by the eyes of a hungry beggar.
Prophesy of Peace (a working title) writing